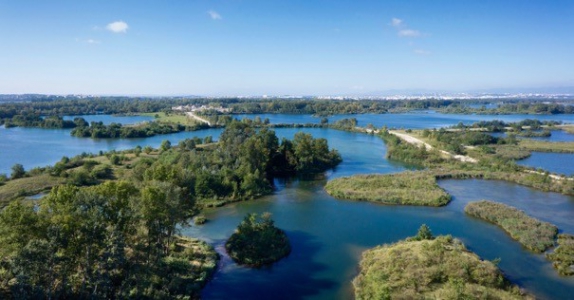 Flood were feared, but temporal distancing made those who lived there retain primarily positive values in oral history, such as memories of rescuers moving from house to house boat to offer their services, and collective spirit consolidating social bonds between neighbours.

Miribel-Jonage floodplain has been protected the city from floods for nearly 150 years, and water is still a major infrastructure in Grand Parc Miribel Jonage, created from Symalim joint association of local communities in 1968. The challenge of preservation of flood capacity, together with a reserve of drinking water, lead the community to recognize it as a conservation area for water management and biodiversity. However, social needs and economic pressure are still there, as the land includes also industrial activity with gravel extraction, today disappearing, and recreation place for eastern Lyon residents.

To prevent gentrification, and support fair and equitable access to a high quality of life, one of the Grand Parc Miribel Jonage mission is to facilitate access to scenery, nature, or services for recreation activities, in particular for people who might otherwise not have the means to access them.

The role of farmers is besides essential for servicing landscapes and maintain economic activity. Grand Parc owns 400 ha of farmlands operated by 16 contracted farmers, plus 100 ha operated directly. Those are mainly cereals. The label "Les Saveurs du Grand Parc" aims to encourage producers, distributors, processors and consumers to focus on organic and local products. It includes a quality charter with 4 goals that integrates local economy:

- and create links between producer and consumer.

It defines a scope for the products involved, that are divided into seven families:

- Flowers and herbs or derivatives;

A workshop was organized to evaluate the balance between supply and demand, and identify the tools to be implemented for promotion of local supply. Workshop dialogue contributed to build a dynamic, followed by the writing of a land charter, and the signature of a convention with farmers.

Today facing multiple uses and functions, within a ‘Vision for 2030’, the different actors have to integrate temporal and spatial dimensions in an overall approach to manage complexity.

Amzert A. et al., 2000, From "uncontrolled" to "immutable”: the social conditions surrounding the creation of an "ecological space" in an urban context. The case of the Miribel Jonage park.

Armani G., 2006, Anthroposystem river: first elements for the construction of a new subject for research

Combe C., 2004, The risk of flooding upstream of Lyon: past experience and present realities

Dear Arjan,
Thank you very much for your interest. Indeed, mistake is mine, I translated the title but original document is in french here :
http://www2.culture.gouv.fr/culture/dp/mpe/recherche/pdf/R_471.pdf
I'm not sure wether you can use it in original language. Author has another publication in english called 'A comparison of social processes at three sites of the French Rhône River subjected to ecological restoration.' if that helps your research.
If any other questions, please feel free to contact me directly at contact@alticime.net.
Best regards,
Geneviève Girod

I really enjoyed your blog on the Rhône pirates and Grand Parc Miribel Jonage. I am currently working on a dissertation (at Heidelberg University) about the relation between men and water., to be more specific: the history of flooding in the Upper Rhine Valley Therefore I am also very interested in the literature that helped you to write this blog and contributed to your ideas to manage a complex river system both environmentally and socially.

I would really like to read what G. Armani has written on Antroposystems of the river Rhône as well, but it is very hard to find his article online. Would you be able to help me and give me a hint where I could find his article. I would be very thankful.

Thank you very much and I keep on reading this interesting blog.