No attempt to implement the European Landscape Convention can be successful without knowing what is important to local people. In the UK the demand for a more locally focussed agenda is being met in part by the making of Community Plans, typically for a village and the land surrounding, which form a parish. In the deeper countryside, this administrative parish is often coterminous with the ecclesiastical parish centred on the parish church, and that is so in Winkleigh, the village in the middle of Devon, in South West England, which is the subject of this article. 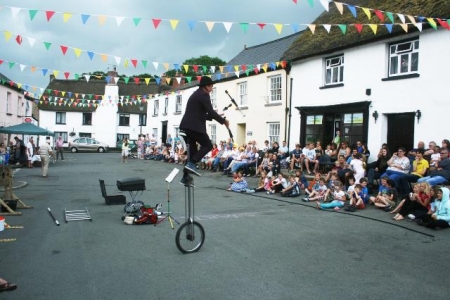 One critical element is the relationship between the team writing the plan, the wider community and the elected parish council. There is a widespread distrust of traditional democracy, even right down at village level, and the elected councillors are very busy with legal requirements. Hence the community planning group must not be perceived by the public as being yet another arm of government, however local; it must be prepared to represent the views of the people, if necessary even in opposition to the local council. On the other hand, to have no connection with the elected members who have a democratic mandate, would be equally absurd, so a careful relationship is necessary, especially any costs are likely to require council funding.

The selection of the team is inevitably largely one of self-selection. In the end no-one should feel excluded … if they want to be involved then they are welcome. However, there will be those whose expertise immediately gives them an important position; in Winkleigh one resident was a Planning Officer for another district, and another was a retired statistician. Expertise in Design and PR are equally important. There is a need for balance. No smaller settlements within the parish should feel excluded, and in a large village such as Winkleigh (population 1,643) other nearby villages need some consultation. Getting age representation is difficult as so many young parents have little time for meetings. Winkleigh is a traditional village based on agriculture but with a substantial recent neo-rural population, commuters, second-homers, retired people. The farming population seems particularly difficult to involve but it is crucial as they usually own the land under discussion, which others regard as landscape.

A questionnaire is inevitable, and we spent many meetings devising questions that attempted to discover what people thought important. Winkleigh achieved responses from over 30% of the population, which is apparently good. Inevitably there are those who will not respond until after publication, when they can criticise the result! These plans certainly include landscape and heritage issues, but they are much wider in their scope. Such plans cannot be artificially limited to one area of policy as the public mind is not divided into compartments that fit with administrators departments. Issues of health and education, transport and communications will usually take a front seat. You are offering the whole population the opportunity to complain about anything they wish, while hoping that practical solutions might also surface. We found that a special questionnaire for the young was needed, partly because their views about what was important differed dramatically from their parents.

There is usually someone who ‘knows the buzzwords’ the popular agenda of policy makers at the time, and these can be used to create a document that looks to politicians higher up the chain as though this parish is part of the wider world. There is always a danger of appearing to be a place that wants no change of any kind and there is a balance to be struck between ensuring a local view, an achievable vision and pitching the Plan at authoritative decision-makers. The Winkleigh plan focussed on promoting sustainability and resilience. In a year of intense flooding, the concept of resilience met with wide understanding. In a farming community when the Brundtland definition of Sustainability was quoted at the group, the farmers simply said that was the whole principle of good farming practice so there was nothing new about it.

Quite frequently the need from the local people is for good advice. When the expert is called in (perhaps a traffic engineer) by the village who need advice on traffic management any solution found is much more widely accepted. And the expert feels wanted and not like an alien visitor. On many occasions the team were seriously divided over solutions to problems, but all could agree on the problem. So the solutions part of the document, the Action Plan, which will need regularly updating and monitoring, was a supplement. This is particularly the case because nearly all the solutions can only be implemented by others, usually outside the village, district and county councils, ngos and private individuals.

In this village it became very evident that the community’s idea of heritage was not that of the experts. Of course, people agreed that heritage buildings should be conserved, such as the church and the water pump, but the annual Fair (now in its 752nd year) was much more important. And the village square is more important than any building. Experts may prefer solid artefacts, but people’s heritage more often focuses on events, people and sites. Views are also of real significance. Winkleigh is a hill-top village and the view of the village from the south, most particularly at night, and the view southwards towards the Dartmoor hills were always mentioned as critical to identity.

There is plenty of realism, or cynicism, about the extent to which higher authorities will take notice of the local community. The wish of the village for dark skies does not prevent the road engineers installing huge lights to remain lit all night on a junction that they consider a problem.  However, those authorities are usually at least grateful to know what local people want. When cynicism sets in, it is important to remember that the Process is as important as the Product; local people sitting round a table arguing about how they want their place to evolve itself creates community.