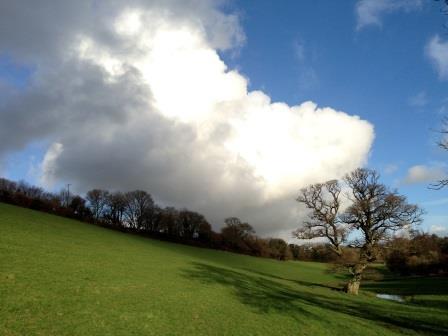 The surface area of a tree is immense. Flattened out a single mature tree is considerably larger than the field it stands in. This dominance in our landscapes mean that trees are the most distinct landscape feature for us all, whether we live in a rural or urban landscape.

Increasingly in the UK we find that the easiest connection in engaging with people in regards discussing their landscape is via landscape features; hedgerows, dry stone walls, trees and ponds etc., and of course new landscape features such as wind turbines. Resulting communication is invariably centred on threats to existing landscape features and the placement of new ones.

With the growth of PR and its heavy influence on general media and to some extent social media also, we have seen a breakdown in communication between national companies and organisations and local people towards solving landscape conflicts resulting from threats to and from landscape features. The result is added costs to us all as taxpayers – protest is expensive for all sides and distorts all other values of the landscape feature concerned.

Many people have been working, independently from one another, towards solving this problem for the greatest of our natural landscape features; Trees.

It is now abundantly clear that in order to value trees properly we first must influence the people who share that tree’s landscape in recognising the varying reasons for a tree’s existence and recording this. There are several initiatives and projects now which are heading along the same path in this regard, including the pan-European ‘Tree of the Year’ competition¹, the Community Tree Strategies of Epping Forest², the Heritage Tree project by Jeremy Barrell³ and many more, which could all feed into one another.

Therefore for the first UK Cultural Landscapes Day event on the 20th of September it made sense to discuss these various approaches to the people of Modbury.

We invited the Tree Hunter, Rob McBride, whose own work is very much in line with this general approach, to come and host the event. Rob was able to enthuse the locals of Modbury with regards trees which many of them had not realised were on their doorstep. Together with other tree professionals from various disciplines as well as ecologists and nature conservationists, many questions were answered several times from a different angle, exposing the holistic considerations to be made.

In the evening the lecture by Jeremy Barrell included some shocking images of the destruction of some of the UK’s most important trees, highlighting the need for recording our trees as we would our archaeological and architectural monuments, (which ironically are often younger than our arboreal monuments).

Earlier that week Rob had been notified of the discovery of, and subsequently, visited a huge Oak on private land in Shropshire, his home county, which had not been recorded. Nicknamed ‘The William the Conqueror Oak’ as it dates from the same period, Rob stated on BBC radio on the morning of the Modbury event that had a building of that period been discovered it would have been awarded instant protection. But this tree could be felled tomorrow! 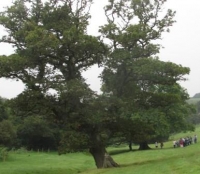