1st Workshop in Vooremaa & Kodavere parish, Estonia on A Dialogue for Landscape Action

The aim of the workshop was to introduce local stakeholders to the HERCULES project, the Knowledge Hub, and also our work within WP2 and WP3. We wanted to assess what the presented stakeholders value in their landscape and what do they consider as a threat to those valued elements.

Mari Niitra, museum director, welcomed the audience and introduced the HERCULES team. Then the Estonian team of HERCULES introduced not just the project itself, bu also the Knowledge Hub an its benefits.

Ingmar Noorlaid, chief inspector of archaeological heritage in the county of Tartu was invited as external speaker to the event. He talked about archaeological heritage as a whole, what kind of objects one can find in Kodavere area and also about the responsibility of land owners. A very important topic that he touched was the problem of illegal metal detecting, and what should be done if land owners see suspicious people detecting their fields.

The presentations were followed by an hour long discussion about different aspects of local cultural heritage. The discussion was continued around the lunch table.

the follwoing day, the HERCULES team discovered the everyday landscape of the study area just next to the Lake Pepsi. 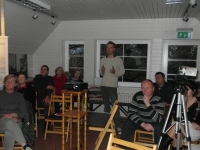