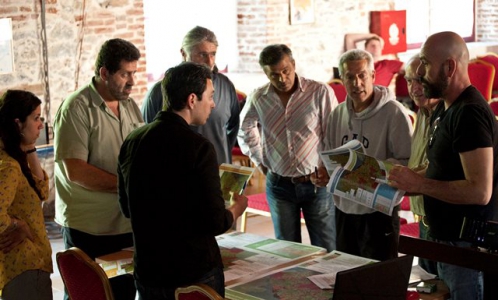 A lesson clearly learnt from the nine Case Study landscapes of the project is that governance in the interest of sustainable landscape management and heritage conservation needs to be holistic, taking into account the human factors at work in the landscape as well as biophysical aspects. As a result, governance solutions must be applied in context.

Agent-based models present tools able to closely capture socio-ecological feedbacks and thus hold potential to shed valuable insights into the operational realities within which governance may exert influence. Such a premise, by definition, requires a thorough understanding of local dynamics, most often best acquired by developing models in close collaboration with local stakeholders.

The preliminary model presented at the workshop was constructed based on extensive interviews with farmers in Gera undertaken throughout the summer of 2015. While these have shed light on the different motivations guiding farmers in their decision-making, questions remained regarding how farmers may respond to changing social, infrastructural and economic drivers, acting from the supra-national to the very local scale.

The workshop thus explained the assumptions behind the preliminary model and presented it as a “work-in-progress” - a tool whose functioning and utility could benefit from critical inputs from both the expert HERCULES and local farming communities. By means of open discussions and break-out groups making use of scenario maps and questionnaires, both communities were able to express opinions regarding the future landscape change dynamics captured.

The workshop was well evaluated by the local farming community. The model was seen as informative and particularly valued as a tool for opening discussion on the future of the area; farmers stressed the importance of such initiatives in maintaining a motivational drive at a time of agricultural abandonment and increased uncertainty for heritage conservation. Researchers similarly greatly appreciated the insights provided by both communities and would like to thank them for their enthusiastic participation! We’re now busy integrating new knowledge and perspectives in a refined model.